If the past few months have taught us anything it’s that we shouldn’t take for granted what's been in front of us all along.

For example, wasting time dreading that we won't be able travel somewhere sunny to escape the coming winter is only going to get in the way of enjoying the glory and splendour of autumn right here in Canada.

Driving the 2021 Subaru Crosstrek, throwing mud on trails in southern Ontario's largest forest, and kicking up red and yellow leaves on country roads served to remind me to be grateful for the easy access to beauty and nature that we enjoy in our own backyards.

The Crosstrek itself could be considered in similar terms. Yes, it has plenty of competition these days in the smoking-hot subcompact crossover segment, but the Crosstrek was one of the originals when it debuted back in 2013. With so many shiny and new offerings out there it's easy to forget about this small Subie, but doing so is only a disservice to those shopping in this segment. Updates for 2021 should only serve as reminders of its relevance.

The biggest news comes in the form of a power bump. A 2.5L engine with four horizontally opposed cylinders is now available in two trims, the new Outdoor and the top-of-the-line Limited. At 182 hp and 176 lb-ft of torque at 4,400 rpm, that constitutes increases of 30 hp and 31 lb-ft of torque over the 2.0L engine that powers the rest of the lineup.

This is a great fit for the Crosstrek in a few ways. Power delivery feels great on the road, helped out by a continuously-variable transmission (CVT) that feels much more natural than most thanks to simulated steps in the revs that replicate the feel of shifting between ratios in a conventional automatic. The engine's low position in the engine bay puts its weight closer to the road, which contributes to the Crosstrek’s excellent handling in spite of the relatively high 220-mm ground clearance.

And because it’s more powerful, this engine doesn’t have to work especially hard to move around the crossover’s weight. The exact amount varies, but the Outdoor trim tested here has a curb weight of 1,485 kg (3,274 lb). This results in respectable fuel economy ratings of 8.8 L/100 km in city driving and 7.0 on the highway, figures that aren’t at all far off those of the 2.0L (8.5 and 7.0, respectively).

So, why wouldn’t you choose the larger engine? If you’re a disciple of the third pedal then you’ll want to seriously consider the 2.0L, as it’s the only one that can be paired with the available six-speed manual transmission. Starting with the bad news: this does come with a huge hit at the pumps, to the tune of 10.5 L/100 km city and 8.1 highway. But on the other hand, it's one of the few crossovers left that's offered this way. And it's not just the cheap-as-dirt base trim, either; it’s available in all three trims with the 2.0L engine. Subaru hasn’t shied away from discontinuing manuals where they don’t sell – please see the Legacy, Outback, and Forester for proof – but brand representatives say that about 12 per cent of Crosstrek buyers in Canada still choose to shift gears themselves. That’s a phenomenal statistic in this day and age.

Sadly, it won’t last forever. Subaru's EyeSight suite of safety and driver-assist features, which includes pre-collision systems like automatic emergency braking, adaptive cruise control, lane-centring and lane-keep assist, lane-sway and -departure warning, and lead vehicle start alert, hasn’t been developed to work with the manual transmission. And the day will come when demand for these technologies outstrips the desire to row one’s own gears. In the meantime, if you prioritize the latter over the former, snap one up while you can.

Back to the 2.5L engine, which enters the Crosstrek lineup at the new Outdoor trim – the version tested during this first drive.

The acid yellow paint colour shown is exclusive to this new trim, though the matching contrast accents inside come in every Outdoor unit (interior accents are orange in the rest of the trims with the exception of the base model).

The mix of equipment is intended to please outdoorsy types – hence the name – through features like a trim-exclusive dual-mode drive selector designed to improve performance in a variety of conditions, a front-view camera to assist with visibility around blind corners and over steep hills, 17-inch wheels, an upgraded eight-inch infotainment system, and gunmetal grey exterior accents. There’s also a small overhead lamp on the tailgate, which could be handy when unloading gear after dark.

What’s not included is a sunroof of any kind. Subaru Canada’s Crosstrek expert, Brad Evans, says the team considered it, but given that the goal on this trim was to stay below $30,000 before freight and fees – the MSRP lands right at $29,995 – and proper adventurers are just as likely to put bikes or a cargo box on the roof and block out the light anyway, the drawbacks outweighed the benefits. Those who want the upgrade can opt for the Sport or Limited trims instead.

If I had one criticism of the Outdoor trim it’s that I wish the audio system was a better. The six-speaker setup doesn’t sound all that great, which might lead audiophiles to upgrade to the Limited trim for the eight-speaker unit it includes, or just consider the Mazda CX-30 instead.

Here’s a thoughtful update that should be in a lot more vehicles: the 2021 Crosstrek gets a self-returning light switch that will flip back to auto whenever the vehicle is started regardless of where it was last set. It's a new failsafe to curb what Transport Canada calls "phantom vehicles" – those cruising around after dark, their drivers unaware that their exterior lighting isn't illuminated.

Lane-centring is now a standard feature in the EyeSight suite, and it's intended to keep the vehicle centred in its lane of travel with adaptive cruise control engaged. In mid-afternoon traffic on Highway 401 I noticed a light ping-ponging sensation; whether I felt the need to correct it because it was bouncing or it was bouncing because I corrected it is up for debate. Regardless, I ended up turning it off.

A heated steering wheel is now equipped on the Touring trim, one level up from the entry-level Convenience.

The 2021 Subaru Crosstrek is arriving at dealerships across the country. If you’re among the growing number of Canadians shopping for these smaller crossovers, consider adding this one to your list. It may not be the prettiest or the flashiest little SUV in town, but there’s a lot of performance and value packed into this small package that deserves to be noticed.

MSRP listed below do not include $1,800 in freight and PDI. 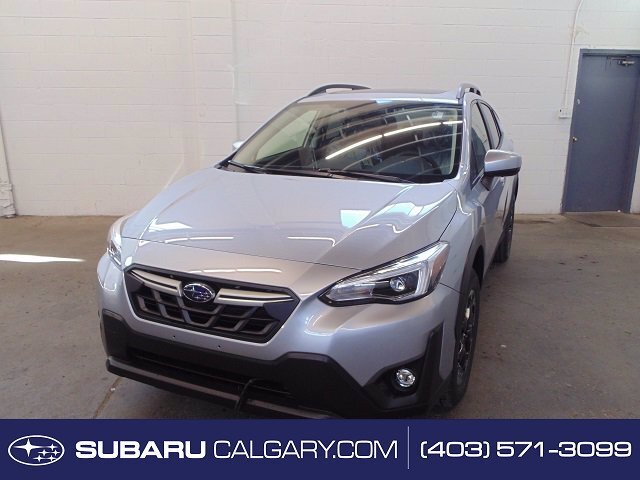 All Articles by Stephanie Wallcraft

Stephanie Wallcraft is the child of an auto worker and honed her passion for cars in the grandstands of the Molson Indy Toronto. Today she continues the family tradition by writing about cars and motorsport for publications across Canada.

2020 Subaru Crosstrek vs Subaru Forester, by the Numbers