My assigned unit was number K0484. We had a good time. Sound effects were made.

Another method for increasing an engine’s power output is becoming increasingly rare – though it’s front and centre in the Ford Mustang world, and in this specific case, in the new-for-2019 Mustang Bullitt. That method of generating increased output? Make the engine spin faster.

Ford’s sticking to its guns on this approach with the 2019 Mustang GT, and the new Bullitt variant thereof. Ford’s 5.0-litre Coyote V8 is an absolute class act, loves to rev, and in Bullitt guise, makes an improved-by-15 ponies output of 475 horses, all-motor style. Also, it revs gleefully to its screaming 7,400 rpm redline, which is just fine with me.

In a world where turbocharged engines have boosted efficiency and performance at the expense of a shapely power curve and (often) a decent exhaust sound, America is still doing some lovely stuff with the all-motor V8 – and the Mustang Bullitt’s lightly tweaked Coyote 5.0L unit is a shining example of how.

It’s the high-revving heart of this rev-rocket sleeper-Stang, itself designed to fly fast under the radar. Inspired by the Mustang from the 1968 movie Bullitt, this rare-but-recurring special-edition unit pops up every few years with quietly sinister styling, a reduction in flashy flair, and a few signature upgrades that give shoppers an exclusive package that’s quiet(-looking), classy, and understated.

Here’s the sticky: Bullitt is an optional model variant that builds on the Mustang GT with unique looks, a tweaked engine, and various cosmetic revisions that partly consist of a de-badging job to help set it apart. A six-speed stick is the only transmission option, because that’s badass – and badass is what this Mustang is all about.

Don’t miss the scowling, emblem-free face, the throwback gloss-black, chrome-ringed wheels, or the big red Brembos peeking out from behind them. My tester’s signature Highland Green paint nods to the movie car, and gives this Bullitt some extra exclusivity. Ditto the serialized number plate on the dash.

My assigned unit was number K0484. We had a good time. Sound effects were made.

Bullitt is everything the Mustang GT has to offer, with a bit more power and performance, and a bit less visual flair. Plus, since it’s running the latest generation of Mustang high-tech, it’s loaded to the nines with goodies that performance buffs and gadget geeks alike will love.

For instance, the exhaust can, at a button press, be toggled between four volume settings that range from Quiet to Track. That Track setting activates after you accept a digital disclaimer that advises you shouldn’t use it in public, which of course means that you will. There’s even a programmable timer that lets drivers specify which times of day that Bullitt’s gnarly exhaust is closed up and quieted down at start-up, perhaps to avoid waking half the neighbourhood when firing it up at 6 am.

Or, skip that, fire the engine up, and apologize later to waking everyone up in a half-mile radius. Or don’t. You are the boss of the Bullitt’s exhaust system.

Ditto its suspension. And steering. And instrument cluster.

Just tap a toggle-dilly on the console to step through various drive modes, each deploying a unique set of sub-system calibrations for the adaptive suspension, exhaust, steering feel, traction assist, and even the layout of the all-digital instrument cluster. Notably, said cluster is high in resolution, unfailingly detailed, and equal in display attractiveness to any number of similar setups I’ve seen in luxury cars for big-dollar shot-callers. If you don’t like the idea of an all-digital instrument cluster, this might change your mind. 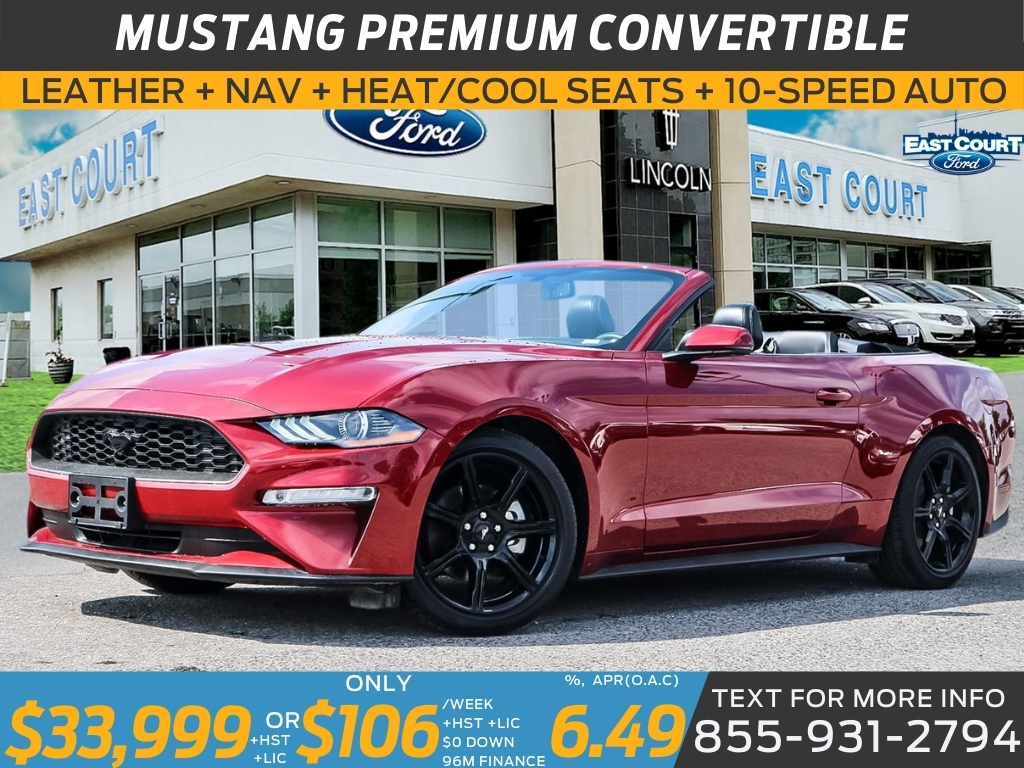 It’s all taken in from Mustang’s latest interior, which is mostly good news.

The good? The huggy, green-stitched Recaro seats are comfy and supportive but not overdone, trimmings look mostly modern and upscale, the B&O Play stereo is potent, and the Ford Sync interface is about the most easily learned, no-BS unit of its kind. Two adults up front will have adequate space, there’s decent at-hand storage nearby, plenty of charging ports, and outward sightlines are the best in the segment. Unlike the Challenger, and (moreso) the Camaro, you can see out of the Mustang, there are places to keep you things near you while you drive, and it doesn’t feel like you’re being transported around via a motorized cave.

To my eye, Mustang’s cabin also looks more modern and premium than the interiors of the Challenger or Camaro. All said, this one’s easy to live with. Heck, it’s even got a road-trip-ready trunk.

The downsides? Rear seats are all but useless for adults, and many of the plastic panels trimming the lower portions of the cabin seem to smudge, scrape, and scratch if you so much as look at them the wrong way. Plus, for the money, I could have done with some seat heaters, or power seat adjustments.

The powertrain takes centre stage in the performance, here.

You don’t benefit from the low-end mountain of torque on offer from the bigger Hemi or LT1 engines (Challenger, Camaro), but Bullitt’s fast-revving five-litre really starts to come alive at the sort of revs where Challenger and Camaro are running out of steam and reaching for the next gear. With the Mustang, you need to use more revs more of the time, and keep the engine on a rolling boil. This suits the enthusiast just fine, especially because it means more frequent use of the six-speed manual shifter.

And it’s a pretty good shifter too: nice action, light and easygoing clutch that holds power nicely and doesn’t feel like steamed cake, and a joy to put through its paces once you’ve learned the rhythm and deep throttle strokes required for manual rev-matching. (Use plenty of throttle and don’t be shy: brief but full “to-the-floor” throttle stabs create the best blips for your Steve McQueen downshifts).

Conversely, though blasphemous, a button tap enables computer-trigged auto rev-matching on your behalf. I tried it for two minutes. It works nicely, but I felt dirty afterwards, so I switched it off.

Included was a neat-o electronic throttle trick that I do like, though: if you ease out of the clutch without your foot on the throttle, the engine revs, slightly, on its own. This makes it easier to smoothly drive through rush-hour traffic with one foot.

So: choose your rev-matching, your exhaust sound, the way the steering feels, how much traction assist you’d like, and how you’d like the machine to ride and steer. You’re never more than a button tap or two from instantly toggling Bullitt from a rip-snorting car-chase on wheels to a stealthy and comfy cruiser that’s all-day road-trip ready. The deployment of technology towards matching any whim is strong, here. What a time to be alive.

Should a relaxing cruise be the order of the day, just engage Normal mode and set the exhaust to Quiet. Here, the steering is light and relaxed, the ride is on par with a semi-sporty sedan, and the engine is all but inaudible until pushed. Cruising in sixth sees the revs pegged nice and low too – and fuel mileage is respectable during leisurely highway voyages.

In sportier drive modes, steering feel is direct and quick, and just a little bit lighter than you might expect. This means minimal effort at the wheel turns in big responses from the car, and it feels, primarily, mischievous and light on its feet. Ditto if you try to turn and steer the car with the throttle or brakes in a fast corner, where it reacts to these inputs immediately, consistently, and predictably. Many will find Mustang Bullitt to feel lighter, more natural, and more eager when tossed around than the Camaro or Challenger. You get access to signature performance-car handling sensations with less effort, feel more in touch with the chassis, and enjoy a more naturally athletic feel from the goings-on beneath.

So, while old-school in its own way, Bullitt feels the part of a finely honed, modern driver’s car through and through. It’s my favourite driving experience of the big-three, and one that puts on a hell of a show and feels great doing it. The extra attention to detail and useful little touches are icing on the cake. And I do love me some extra icing, and probably so do you.

A final note: if you’re out and about after dark, the headlights are quite good – easily meeting expectations set by the price tag.

Is it perfect? Close. But some of the cabin plastics are easily marked and scratched, noise levels creep up quickly at higher speeds, and since this engine likes to spend plenty of time at higher revs, it can be fairly thirsty driving around town.

All in all, here’s a very pleasing performance car with many strengths and few weaknesses. Consider it a definite must-drive in this segment. This one’s one of a kind – and in my opinion, the machine to have in its price range.

About Justin Pritchard
Justin Pritchard is an automotive journalist, consultant, TV presenter, and photographer based in Sudbury, Ontario.
Follow me
You may also like
8.2