We take a peak into the rides of the basketball elite – the players and the celebrity fans – that will be in Toronto for the 2016 NBA All...
Advertisement

We take a peak into the rides of the basketball elite – the players and the celebrity fans – that will be in Toronto for the 2016 NBA All... 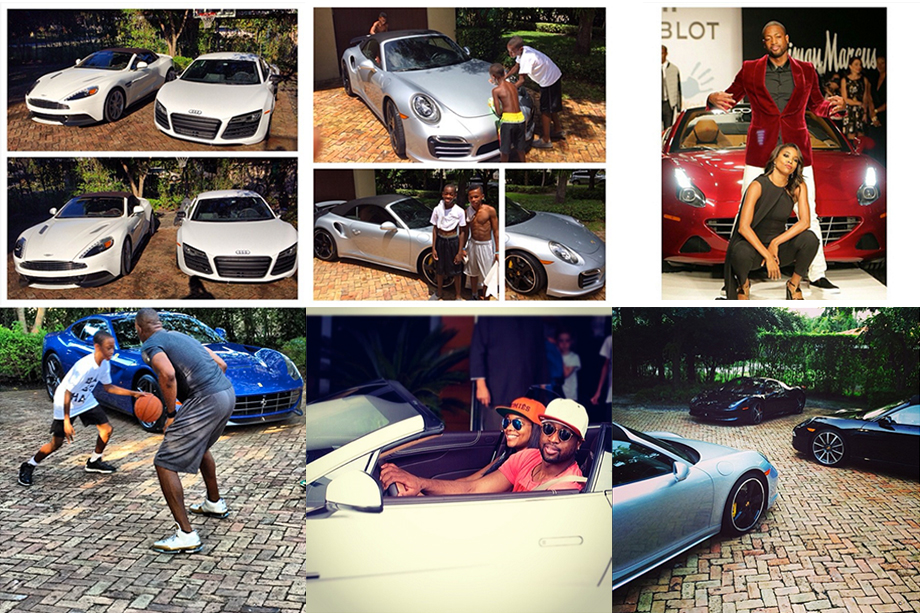 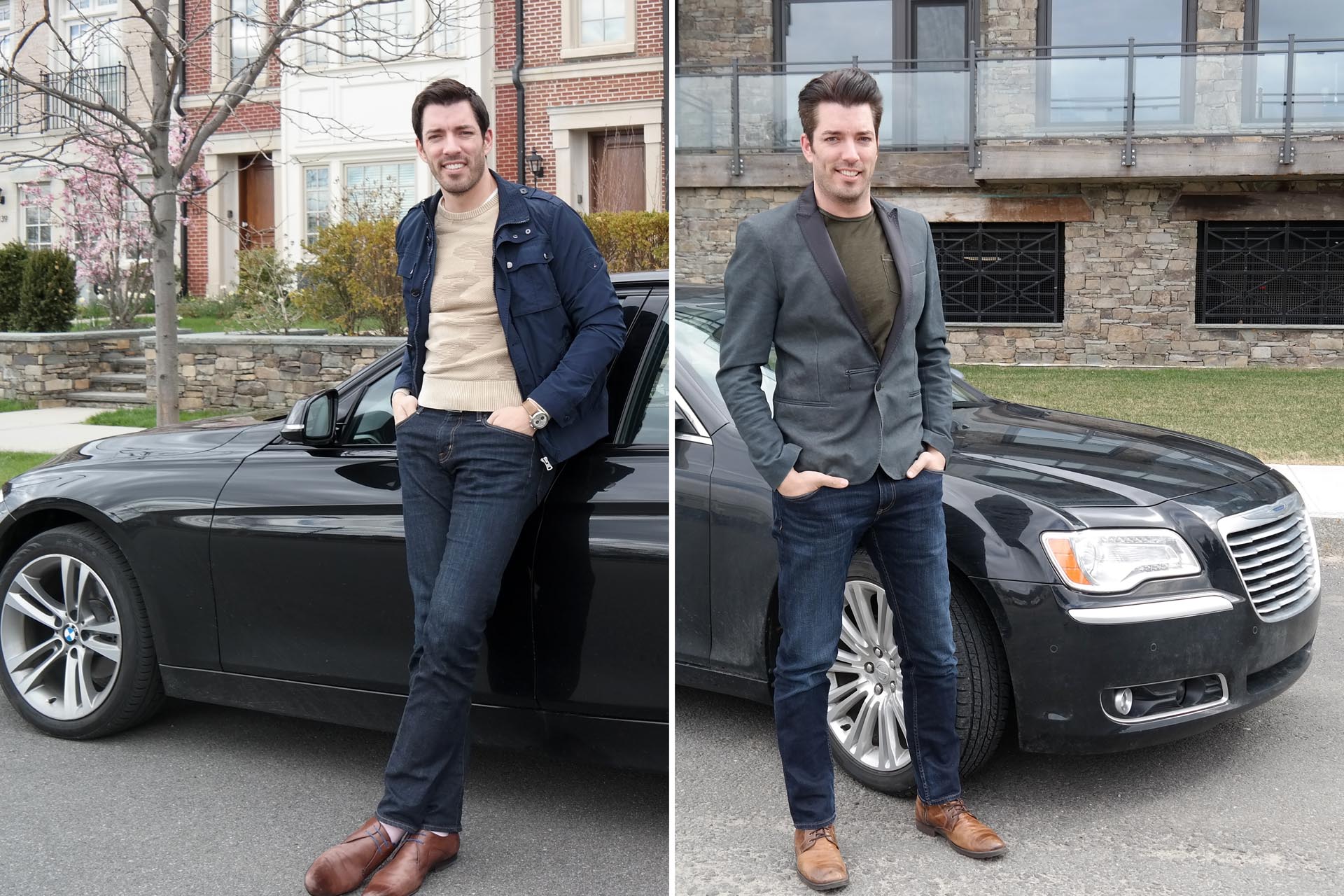 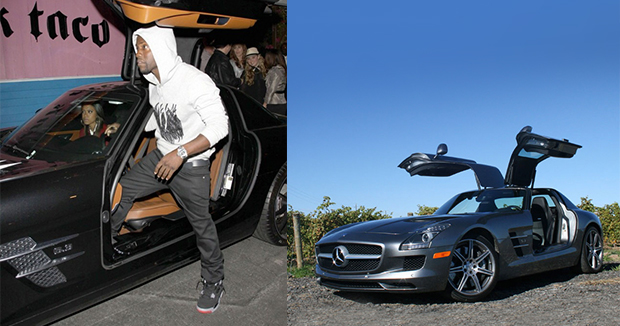 With the most boring Super Bowl in recent history out of the way and still two weeks before a baseball is thrown professionally, the attention of sports fans turns to Toronto where for the first time ever, the NBA All Star game will be hosted.  While the best of game that Canadian James Naismith invented 125 years ago will likely be shuttled around Toronto in Chevy Suburans to keep them away from the rest of us vertically challenged civilians, when they return home on Monday, they’ll be cruising in vehicles that are much more befitting the title of All Star.

But it's not just the NBA All Stars that are making the trip #North, but a supporting cast that would take top billing at many other events participating in this year's Canada vs USA NBA All-Star Celebrity Game sideshow. And as we already covered some of our favourite NBA rides last year, we thought we'd take a peek at what some of the NBA's biggest fans rock on the roads. 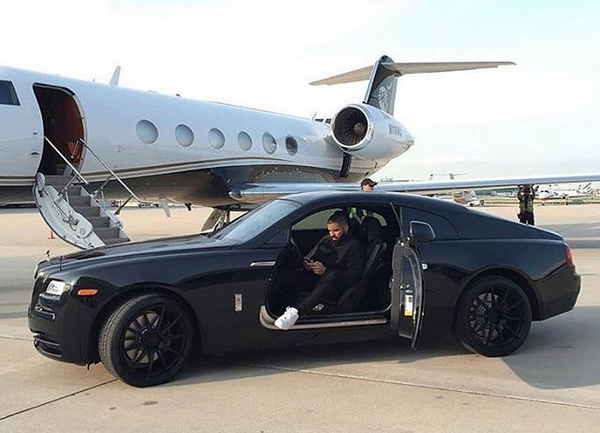 Drake needs no introduction, and his love of basketball, the Raptors and high-end cars is no secret. While Drake isn't shy about showing off his rides, and his collection has included, at various times, a Brabus-modified S-Class Coupe, a Bugatti Veyron, classic Camaro SS muscle car, Bentley Continental GTC and various Rolls-Royces, our favourite might be this latest Roller, an all-black Wraith with black rims that gives the classic exotic a sinister look. Which ride will he choose this weekend in his hometown? Our money's on the Roller.

Kevin Hart is a comedian, movie star and um… rapper. Kind of. He’s also the reigning MVP of the NBA Celebrity All-Star game, and the Coach of the 2016 US side. In 2012 he was driving a Mercedes-Benz SLS. A 563 hp, 6.2L naturally-aspirated V8 powers this svelte roadster. Hart’s is a black one with tan interior. The other pic is one we tested a couple years back.

Toronto Blue Jays' game-winning, bat-flippin’ legend Jose Bautista is also a bit of a cool cat around town, rocking a scooter for his transport needs when his Ferrari is just overkill to get around downtown. Kick, push, kick, push… coast. Bautista is named as a coach for the Canadian squad. 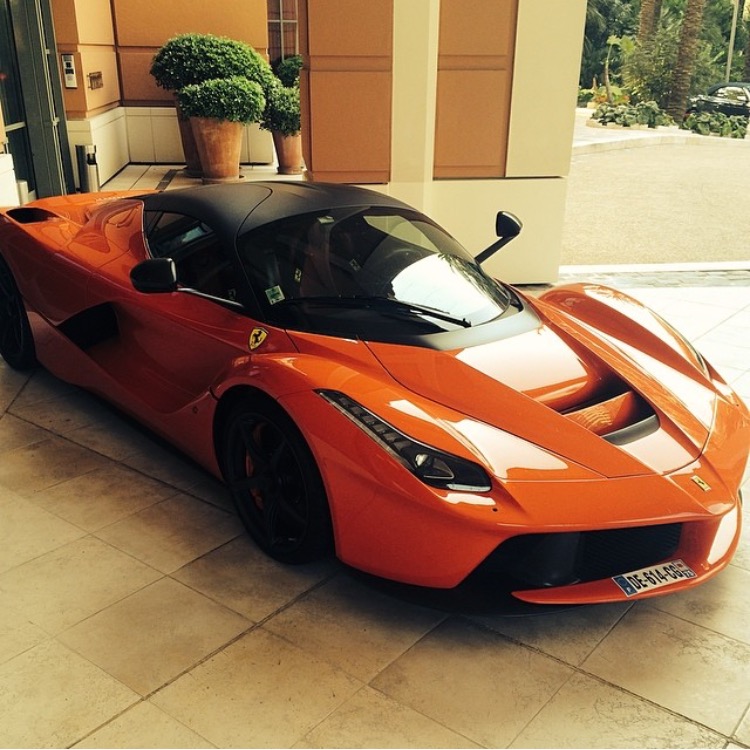 Fresh off his appearance in the Australian Open semifinals, Thornhill, Ontario's Milos Raonic will be looking to defend a different kind of home court this weekend in the Celebrity All-Star game.  While the schedule of a high ranking tennis star means Milos is usually flying rather than driving, if he finds himself behind the wheel in Toronto, we hope it's in this LaFerrari he posted on Instagram in 2014.   The 320 km/h top speed won't get him through Toronto's gridlock any faster, but it will at least give the rest of us something drool over at the next red light.

We all know what Property Brothers Drew and Jonathan Scott can do with hardwood on their internationally popular show, but it remains to be seen if they do anything on it.  When we last caught up with the coolest twins since Arnold and Danny, Drew was pushing his BMW 328xi and Jonathan was alternating between a pair not quite identical Chrysler 300's.

Steve Nash
Canadian hoops legend and two-time NBA MVP will provide some much needed basketball savvy coaching Team Canada alongside Drake. On court, Nash was legendary for his generous ball-distribution and cool calm, but it tuns out that Steve Nash has an alter ego he lets out behind the wheel.

Relax people, we're pretty sure these are just a joke, and that Nash is truly the good guy that all his philanthropy work show him to be.

The affable funny man of SNL and 30 Rock fame is no stranger to a basketball court. Though he is usually sitting courtside with his disproportionately attractive fiancée, actress Olivia Wilde, there is nothing wild about the couple's transportation choices, unless you consider the courage it takes to allow yourself to be photographed in a Toyota Prius or a Vespa on the streets of New York City. 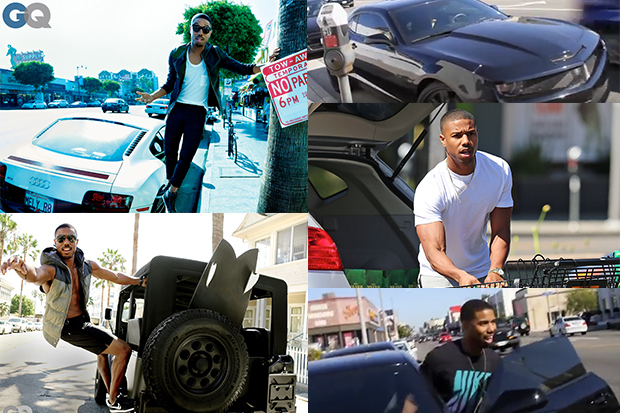 No, not that Michael Jordan, rather the actor that portrayed Adonis Creed, son of Apollo Creed in the Rocky series reboot Creed and Human Torch Johnny Storm in Fantastic Four. Anyhow, now that that's all cleared up, let's dig into Jordan's rides. While we wish he really owned this Icon FJ40 or the Audi R8 or with which he posed in a GQ shoot, Jordan alternately rides in a customized, blacked out Chevrolet Camaro when he's feeling flashy, but does his shopping runs in what looks to us like a Nissan Rogue, practical and affordable, speaking of Jordan's down-to-earth roots.

Looks like LeBron isn’t the only one getting behind the Kia brand, as here we see Nick Cannon taking a break from his Rolls-Royce Phantom Drophead Coupe with his superstar wife Mariah Carey to pose with the Kia K900. However, we’re guessing that was just a temporary visit, as Cannon has entered the automotive business with his Ncredible Motorsports, selling high-end luxe cars at pricey auctions like the gull-winged Mercedes-Benz SLS AMG.

Not to be outdone, the NBA's best themselves represent an All-Star collection of the world finest automobiles. 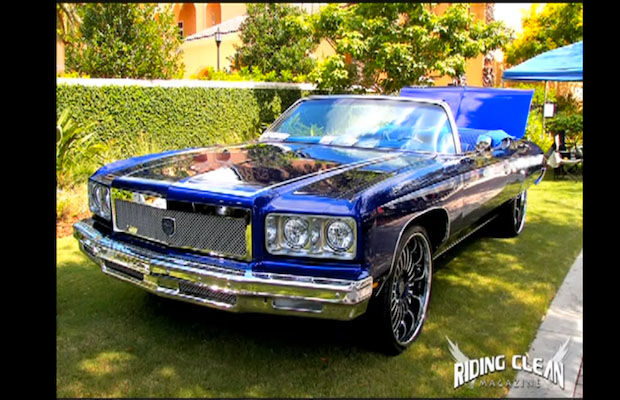 LeBron James has been known to cycle – spandex, helmet and all – into the stadium during his years in Miami, but don’t expect to catch him riding along Queen West this weekend.  When not promoting the Kia K900, cruising in his Ferrari Italia 458, his Challenger SRT or H2, he is bouncing in his pimped-out blue ’75 Impala. 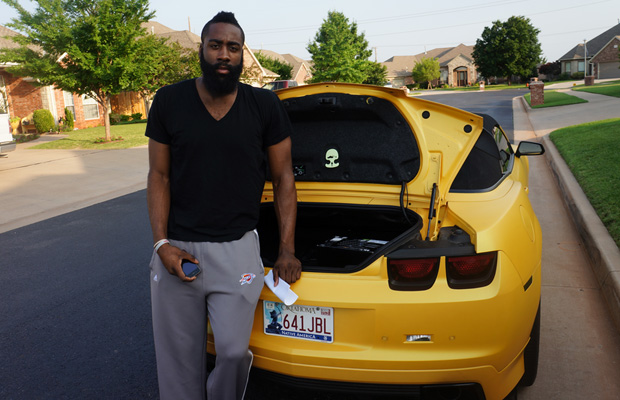 What’s the best way to draw attention to oneself without any real effort?  Growing a horrendous beard of course.  What’s the next step for a bearded, attention seeking, multi-millionaire? Three words; a bright yellow Chevy Camaro. 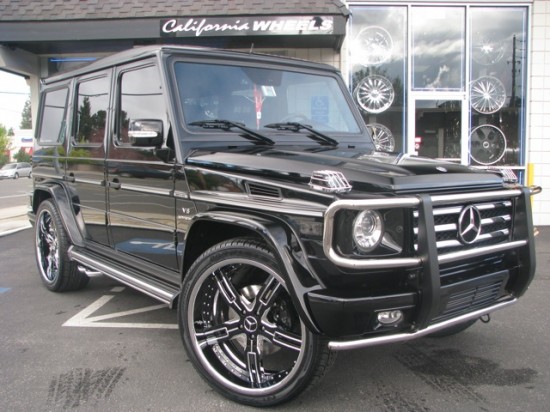 In 2009 six NBA teams overlooked Stephen Curry in the draft because he was perceived as being too small by many scouts.  Now, Curry, who at 27 still looks like he has to ask dad to borrow the car and call mom if he’s going to be out after ten, cannot be overlooked on or off the court.  On the hardwood he hits three-pointers at will, and when he’s driving downtown rather than shooting from there, he does so in his Mercedes G-Wagen with nice choice of aftermarket rims. 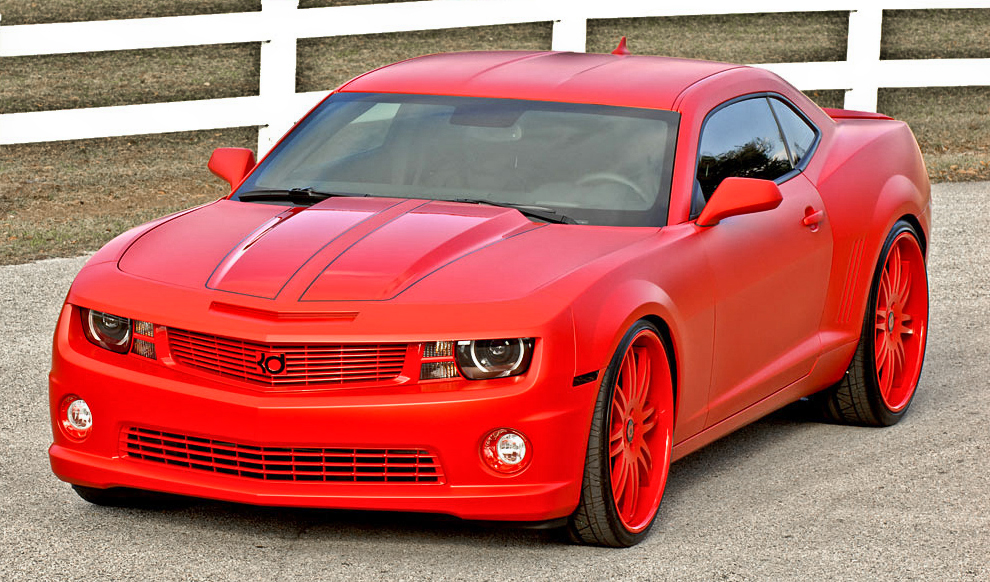 Kevin Durant has to be guilty of the biggest crime against automobiles by any NBA All Star.  This red on red on red ride looks how most cars do before Xzibit pimps them out.  Durant, who is due for a big raise in free agency at the end of this season should, immediately after signing, apologize to the people of Oshawa who built the car that Kevin decided to give the Carrie treatment to. 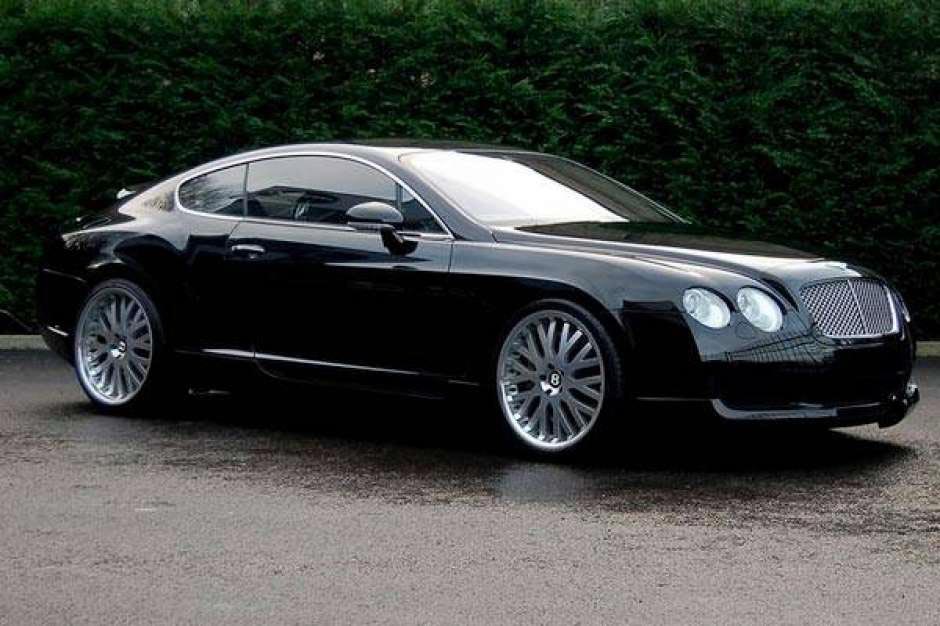 The aging star who is halfway through his NBA farewell tour prefers to fly into work on his helicopter despite a well stocked garage full of Italy’s finest and America’s strongest.  But, being a five-time NBA champion puts Bryant into a very elite group of basketball royalty.  For monarchical conceit, Kobe appropriately reaches for the keys of his Bentley Continental GT.

Dwayne Wade is a very normal guy just like you and me. His Instagram feed is full of very normal normal pictures of his basketball prodigy kids washing his car or playing ball in the drive way, going for a cruise in the Aston Martin with his hot actress wife, and his normal job at a south Florida organization known as the Miami Heat.  Yes, Dwayne has everything you could ever want in life.  And in the case of the MacLaren MP4-12C you've been lusting over, Wade has two of those.

See more
Will Ramirez is a Toronto-based writer, automotive enthusiast and connoisseur of all things baked and deep-fried.
Advertisement